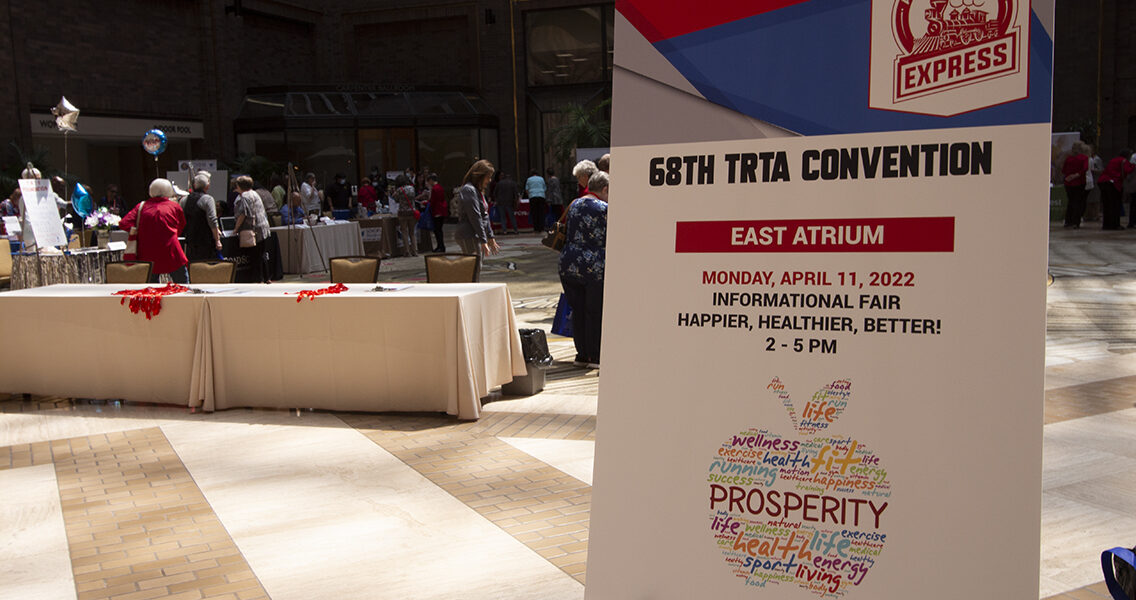 Last week, during the 68th TRTA Convention, members of the Texas Retired Teachers Association (TRTA) met at the Hilton Anatole in Dallas to conduct association business, gather with their fellow retirees, and receive information and resources to help districts and local chapters plan for the coming fiscal year.

The convention was held April 11-13 and was the first statewide association in-person event since 2019. TRTA officers and staff were pleased to see so many familiar faces and to meet many new volunteers ready to support our grassroots advocacy efforts ahead of the 88th Legislative Session that begins in January 2023.

Below are several highlights from convention that TRTA’s entire membership may want to know about! 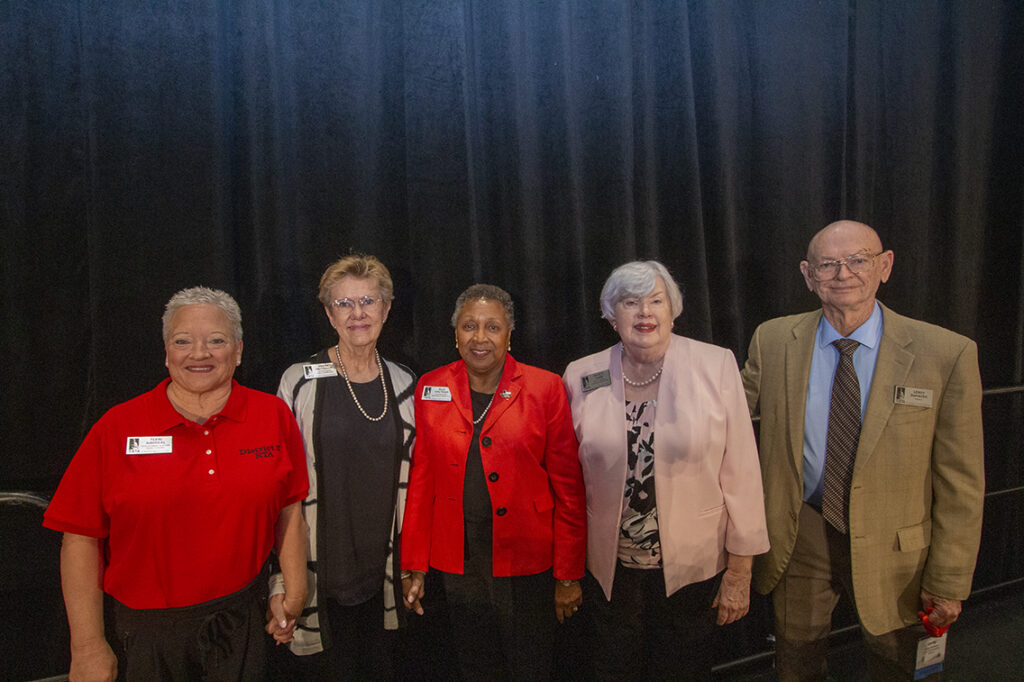 The following individuals who were each elected for a two-year term as a TRTA state officer beginning July 1, 2022:

These individuals were elected by the House of Delegates. Current TRTA President Leroy DeHaven will assume the role of Immediate Past President on July 1. Thank you for your service to TRTA!

During the House of Delegates, current First Vice-President/Membership Chair Marcy Cann announced the State Membership Awards for the following districts and local units.

Congratulations to these hard-working districts and local units!

Of the local chapter, Mr. DeHaven says, “Hurricane Harvey destroyed their town and meeting place. Many of the members’ homes were heavily damaged and some even had to leave to find a place to live temporarily. Their unit president passed away not long after.

Throughout all of this, Aransas County RTA rebounded and is increasing in membership!” The award was presented to Ruth Ann Sheppard, Local Unit President and Tom Weeaks, First Vice-President in recognition of their tireless efforts in the face of great adversity achieving consistent membership growth and representing the goals and mission of Texas Retired Teachers Association.

TRTA Executive Director Tim Lee hosted a panel during a luncheon on April 13 that featured several elected officials. TRTA expresses its thanks to State Senator Royce West, and Representatives Rafael Anchia, Giovanni Capriglione, and Tony Tinderholt for taking the time to discuss the issues that matter most to TRS retirees. Topics covered included how to win a cost-of-living adjustment (COLA) and improve funding for the TRS-Care health insurance program.

The 2022 grant recipients will be receiving a $750 check to support their classroom projects. The 2022 scholarship winners will be receiving a $750 check to cover the cost of certification tests, as well as materials for their first-year classroom. Use the links below to view the winners. Congratulations to all the winners! TRTF wishes them all the best of luck in their future teaching endeavors.

TRTF also wishes to express sincere gratitude to the many generous districts and local chapters that donated items for the silent auction, which was a rousing success. The event raised more than $13,000 for the foundation’s charitable programs, including “A Helping Hand,” the Disaster Relief Fund, and the TRTF Tutor Program. Read more about TRTF’s programs on their website.

TRTA also honored the association’s E.L. Galyean Award recipients for 2020, 2021, and 2022 during a luncheon on April 12. This award recognizes a TRTA member for outstanding and unusual service on the state level to TRTA and its members. The award also serves as a constant reminder of the distinctive quality of committed service rendered by Mr. E. L. Galyean, TRTA’s first Executive Director (1980-1992).

Bill Barnes worked in education for 37 years, beginning in 1965. He became Assistant Principal in HEB ISD in 1969, and principal of Hurst Hills Elementary in 1976. He served as Principal of Spring Garden Elementary from 1983 until his retirement. He joined TRTA in 2002 with the Hurst–Euless–Bedford RSE, where he served as Legislative Committee Co–Chair. He helped found Northwest RSE in 2008 and served as Legislative Chair. Bill served as TRTA’s State Legislative Committee Chair/Coordinator from 2008 to 2019, also serving on the Board of Directors. Bill has testified at state committee hearings and TRS board and congressional meetings, using his influence to represent the voices of thousands of TRS retirees. He also served as District 11 Legislative Chair, Second Vice–President, First Vice–President, President, and Past President. Bill represented retirees’ healthcare concerns by serving on the TRS Retiree Advisory Committee for two terms beginning in 2004. Bill is a family man, married to wife Janice for 50 years, and takes great pride in his daughter and son–in–law, Kelli and Billy, and two grandsons, Trevor and Rhett.

Aubrey Cherry has been a member of TRTA for more than 25 years and has served in numerous leadership positions. He was the local unit president for El Paso RTA and served as District 19 President. He served on the TRTA Board of Directors from 2000 to 2012. Cherry has been described as “the epitome of a professional educator” and “a wonderful ambassador for retired teachers.” Many members may know Cherry from his work at the TRTA conventions where he and his wife, Frances, have served on the Credentials Committee. The E.L. Galyean Award serves as a reminder of the distinctive quality of committed service. Cherry is a well-deserving recipient of the award, as he has provided leadership and inspiration through his decades of service.

Martha Kallus worked steadfastly in positions of service in every aspect of her life, particularly within TRTA. She joined her local unit Midland RTA (now ARSP) as soon as she retired. She served as District 18 President and began eleven years of service at the TRTA state level. She was the Chair of the Local Unit Support Committee for four years, Organizational Affairs Committee for two years and the Retirement Education Committee for four. She turned an unorganized series of scattered retirement education events into an organized, uniform program by educating pre-retirees of their options, obligations, and opportunities for retirement. Martha was also a TRTF trustee for seven years and was Chair of the Classroom Assistance Grants committee. She had the heart and soul of a servant and is greatly missed by all.

Thank you to the 818 TRTA members who participated in this year’s convention. Your dedication to improving the lives of all TRS retirees and current educators is the key to our association’s success. TRTA will provide additional information about upcoming changes to bylaws and association functions in future updates.

The Teacher Retirement System of Texas (TRS) announced today that that tomorrow, Friday, March 18, 2022, TRS-Care policyholders will receive a one-time payment of $448.12 in the form of a one-time check or direct deposit. TRS members who receive paper checks will receive theirs through the mail and should account for mailing time.

Texas Retired Teachers Association (TRTA) membership supported and advocated for this bill as a part of its push to help both TRS-Care and TRS-ActiveCare participants. SB 8 passage was a significant achievement in favor of retired educators and active school employees participating in these health care programs.

From the $286 million additional appropriation for these programs, TRS-Care, the retiree health care program, had an additional $83 million appropriated to it this year. With these funds, a one-time payment of $448.12 will be sent to approximately 185,000 plan participants or surviving spouses. The payment will arrive as a one-time check or direct deposit. This is in addition to retirees’ monthly TRS annuity.

A few frequently asked questions are answered below by TRS, with several others available online (please visit One-Time Payments for TRS-Care).

Who is eligible for the one-time TRS-Care payment?

Will I pay taxes on this one-time TRS-Care payment?

Stay tuned to the Inside Line for more information about issues that impact Texas public education retirees. 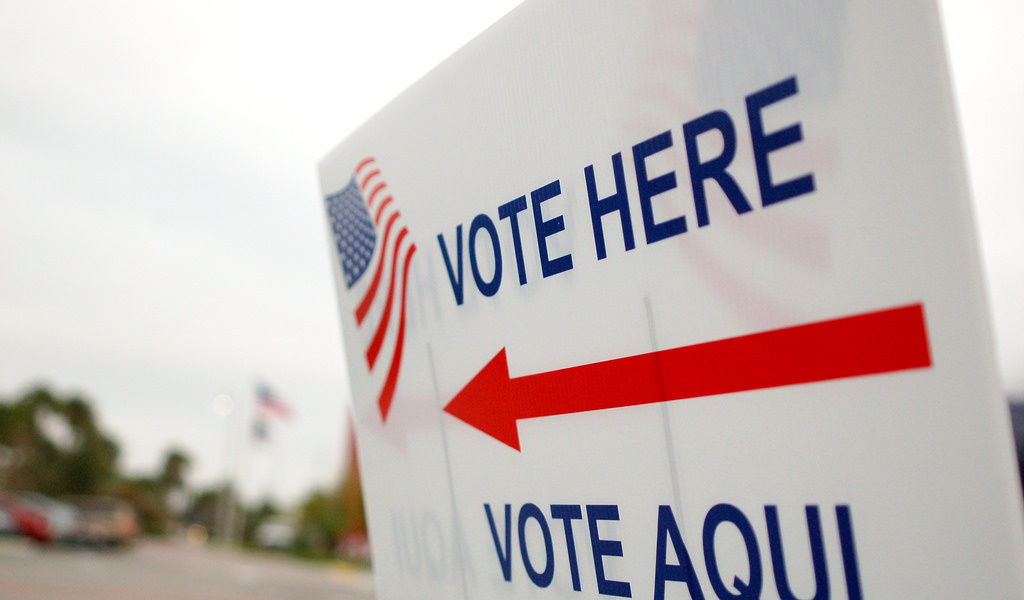 TRTA members, we encourage you to vote in this very important election. Far fewer voters make it to the polls during a Primary Election than during the November General Election.

Numbers really matter in the Primary Election and can make all the difference when choosing candidates who support issues that have an impact on Texas public education retirees and pre-retirees.

The road to influencing future policy outcomes starts NOW, well ahead of the 2023 Legislative Session!

So, get out today and VOTE! Be sure to grab some family members, friends, and neighbors to go with you.