The Teacher Retirement System of Texas (TRS) Board of Trustees met today, Thursday, February 20, 2020 to discuss the agency’s recent decision to lease space in a downtown Austin luxury high-rise office building known as the “Indeed Tower.” TRS has come under fire for its decision to lease the Indeed Tower space for $326,000 per month.

After a lengthy presentation from key decision-makers, including TRS Executive Director Brian Guthrie, the TRS board voted unanimously today to not move into the Indeed Tower. TRS will instead renew its lease at 816 Congress for seven years. TRS will lease additional space at 816 Congress to address its growing staff requirements. The state agency will sub-lease the Indeed Tower space. In total, TRS projects that it will save $9.1 million over the course of seven years, provided that the sub-lease is in place, by staying at 816 Congress.

“If all TRTA members were here today, they would tell you and everyone listening that we need a raise!” Macias said. “Last month, we read stories about TRS using our fund – our money – to pay for its ever-increasing administrative costs. These costs include not only the lease for lavish office space, but also increased bonuses and salaries for TRS employees. We’re not disparaging the need to provide the dedicated TRS staff pay increases. However, we know that the administrative costs are paid out of our fund—the same fund that TRS said cannot afford to provide retirees with a COLA. This is seen and felt as a double standard.”

The full statement is available here.

Earline Hopkins from the Katy Area Retired Educators (KARE) made a powerful testimony too. She explained how the luxury office building compares to the environments that Texas teachers work in.

“It hurts. We worked in portables,” Hopkins said. “Luxury isn’t in the vocabulary of an educators’ life.”

Hopkins also highlighted the pain that educators have been feeling from not receiving a cost-of-living increase. “It’s our money that you’re spending,” she said. “No amount of explaining is going to take away this hurt.”

The Lieutenant Governor shared the following statement with TRTA today:

“Aside from a parent, no one has more impact on the success of a child than a teacher and no group has played a larger role in building the intellectual capital and ingenuity of our state than our retired teachers. That’s why I have taken the lead in providing a secure retirement for our teachers including pension reforms in the last session that will make the retirement system actuarially sound going forward. We have ensured that Texas will not be mired in the pension debt that plagues other states. Since I have been Lt. Governor, we have invested over $1 billion dollars in TRS-Care. I am also particularly proud that we were able to add a thirteenth check for retired teachers in 2019. I spoke up when the TRS Board wanted to raise your health care premiums and I am standing with you now in protesting the outrageous rental costs recently proposed by TRS. I have issued an interim charge to the Senate Finance Committee and they will hold a hearing on this issue later this month.”

Guthrie led the board in a discussion about long-term facilities planning. Guthrie explained that he has met with over one-third of Texas legislators regarding the decision about the Indeed Tower building lease. “We understand and take very seriously that we have a fiduciary responsibility to you, our members, and to the fund,” Guthrie said.

Guthrie then led the trustees through a timeline discussion explaining the agency’s long-term facilities needs, saying the investment division of TRS has been downtown since 2008 at its current 816 Congress location. TRS staff and trustees provided the following rationale for selecting the Indeed Tower: 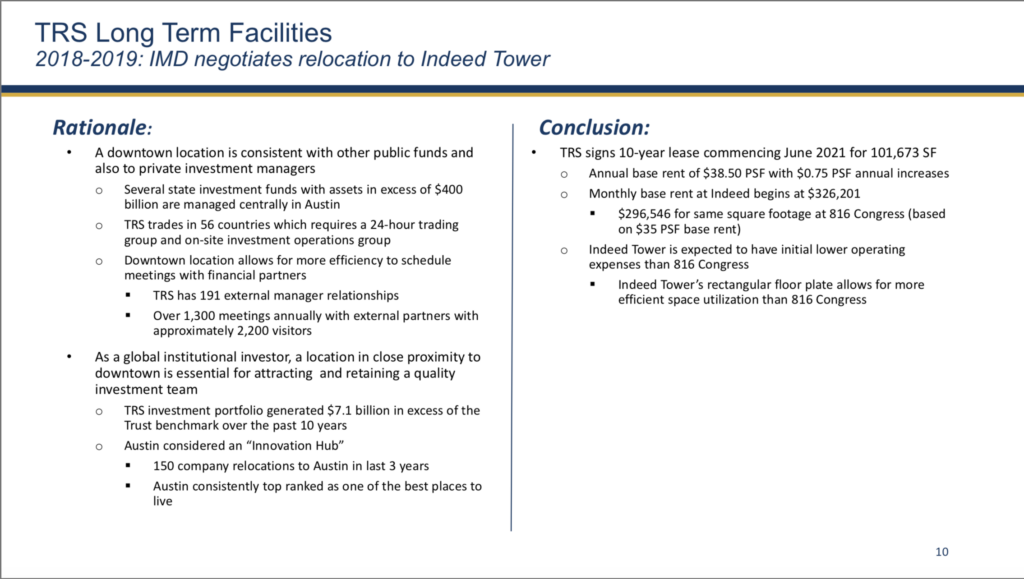 TRS Board Votes to Renew at 816 Congress, Will Sub-Lease Indeed Tower Space

The TRS board was presented with the following options: 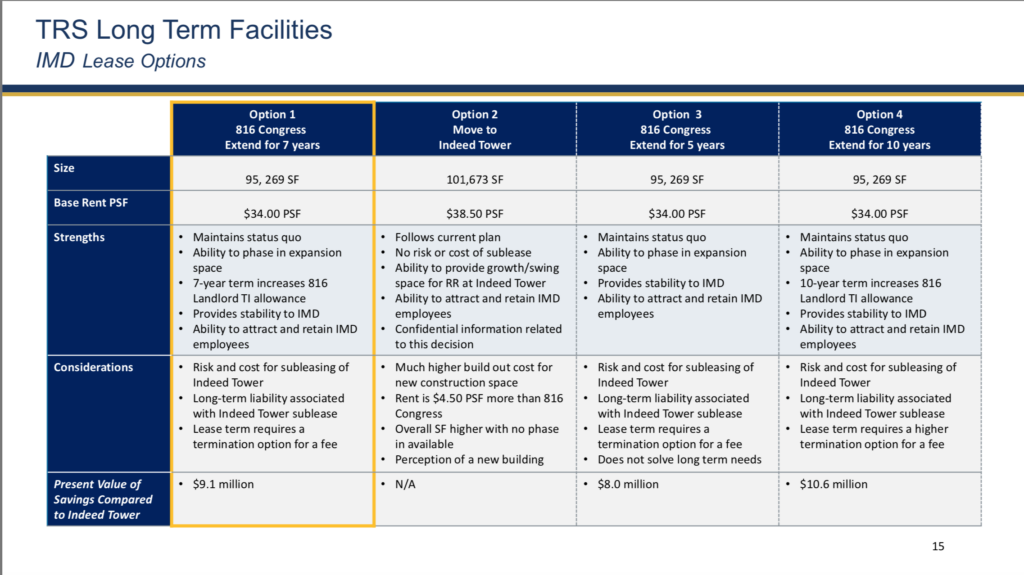 TRS stated it does not have unilateral right to terminate the lease at the Indeed Tower and will essentially become landlords to whatever tenant or tenants sub-lease the space. TRS will still be liable for the lease fees whether a tenant for the space is found or not for the full lease term of 10 years.

TRS staff asked the Board of Trustees to adopt a resolution to negotiate a renewal and expansion of their lease space at 816 Congress, signing on for additional seven years once the current term ends in March 2021. The resolution includes TRS pursuing the subleasing of the space they have at the Indeed Tower. Trustee David Corpus made a motion to approve the resolution, which was seconded by trustee Nanette Sissney. The motion was passed unanimously. Now that the TRS Board of Trustees have made a decision to renew their lease at 816 Congress Avenue and sub-lease the space at the Indeed Tower, TRS will address the Texas Legislature.

TRTA is grateful for the Lieutenant Governor Dan Patrick for making TRS a priority by having a Senate Finance Committee hearing next week. The meeting will be held at the Texas Capitol on Tuesday, February 25 at 10:00 a.m. in Room E1.036.The House Pensions, Investments, and Financial Services Committee will also host a hearing on March 9, 2020 at 10:00 a.m. in Room E2.026. TRTA will provide more details about these scheduled meetings soon. TRS Board to Meet Thursday, Will Discuss Downtown Building Lease

The Teacher Retirement System of Texas (TRS) Board of Trustees will meet this week on Thursday, February 20 and Friday, February 21. On Thursday, the Board plans to hear public testimony and additional information about the decision-making process that led TRS to lease space in a downtown high-rise office building known as the “Indeed Tower.”

The Texas Retired Teachers Association (TRTA) will attend the meeting and provide a statement. TRTA members and friends may view the TRS meetings online using the links below. It is vital that our members view the meeting on Thursday morning, as this is when trustees are expected to hear from various educator stakeholder groups and discuss options going forward regarding the building lease.

Click on the links below to view a live webcast of the TRS meetings (please note, the links will not be live until the meetings are called to order)

You can also view the planned meeting agenda by clicking the link below. The Texas Retired Teachers Association (TRTA) encourages all of our members, friends, and supporters to get out and vote and to vote early! Take a friend, family member, or colleague along with you.

You must be registered in order to vote in Texas. You can check online to see if you are currently registered to vote.

What You Need to Vote

You need to have a form of identification when you go to cast your ballot. Here is a list of acceptable forms of photo identification:

If you don’t have an acceptable form of photo identification, and cannot reasonably obtain one, you can bring one of the following in order to execute a “Reasonable Impediment Declaration:”

Why Vote in the Primary Election?

Using our influence begins now, well ahead of the 87thLegislative Session that begins next January. This is the time when members of the Texas Legislature are most receptive to us! They want our vote and they need to know what our priorities are.

When I speak at retirement seminars, I ask non-members a simple question. “Do you think your retirement would be more secure if TRTA did not exist?” Most people offer a quick and resounding “NO!” You simply cannot leave your retirement security to chance with an ever–changing Legislature that is lobbied by many other organizations that want to change what you have earned.

Twenty years ago, the legislative landscape was far less crowded than it is today. Our association MUST increase its influence or we will hand the power over to those other groups that want TRS benefits reduced and do not care if you have retirement security. TRTA is not willing to leave that to chance!

What Can You Do to Ensure TRTA’s Success and Protect Your Own Retirement?

You may think, “I’m just one person. What can I do that will really make a difference on issues that impact more than 400,000 people?” See the list below and help TRTA and your fellow retirees today!