The Teacher Retirement System of Texas (TRS) Board of Trustees met Wednesday, February 14 in Edinburg, Texas. One of the meeting’s primary objectives was to discuss recommendations from an experience study performed on the pension trust fund by an actuary.

The experience study reviewed the performance of the pension fund over the past five years and considers projections about the economy and investment returns over the next five years. This study, which considers how assumptions compare to actual fund performance, is mandated by law. The board was scheduled to take a vote on whether to reduce the rate of return assumption. However, the board voted to postpone voting on this issue until April.

TRS Board Chairman Jarvis Hollingsworth announced that this meeting, a board retreat that occurs once every two years, is meant to give the trustees time to review significant policy issues. Unlike most TRS Board of Trustees meetings, this retreat is usually done outside of the state capital of Austin where TRS houses its headquarters. The retreat is being held at the University of Texas Rio Grande Valley this week.

Several individuals provided public testimony during the meeting. Dora Luz Cackley, TRTA member and member of the local unit Brownsville Area RSEA, talked about how the new health care changes with TRS-Care are impacting retired educators, especially those under the age of 65 who are not supplemented by Medicare. “Our health care premiums went up, so our pensions went down…we’re scared.” She expressed that many retirees are angry and frustrated. “We feel abandoned.”

Bill Barnes, Texas Retired Teachers Association (TRTA) State Legislative Committee Chair and Coordinator, and Vice-Chair of Retiree Advisory Committee at TRS, gave testimony from a retiree’s perspective. “TRS is our safety net, and retirees have had tremendous confidence in TRS but there are serious concerns from retirees about their pensions and their health care costs.” Barnes stated many retirees ask him if they will ever get any kind of cost-of-living increase and ask him if the rate of return assumption is lowered, “Does that mean there’s no help for retirees?” Barnes stressed that “retirees hope somebody out there is listening to them.” TRTA Executive Director Tim Lee testified about how changing the rate of return assumption would impact future benefits for retirees. “Contributions plus investment returns equals benefits,” Lee said. He also discussed the pressure being placed on TRS to make changes to the assumption. “Any change in the rate of return assumption means we’re going to have to make up money somewhere.” He urged the trustees to consider how this decision will affect long-term solvency.

“We don’t know how other players in this process are going to move forward,” Lee said.

Later during the meeting, during a presentation from Gabriel, Roeder, Smith & Co., it was shown that if TRS accepts the recommendation of 7.25 for the new rate of return assumption, TRS would need to request an increase of 1.82 percent from the state of Texas in contributions to make up the difference resulting from investment return losses.

The TRS Board of Trustees, as a fiduciary body responsible for making prudent decisions to ensure the financial stability of the fund, must address the rate of return assumption issue. When this decision is made, it will then be incumbent upon the Texas Legislature to adopt a higher funding policy for the pension fund to protect the promised benefits for our retired and active educators.

The Legislature cannot take a “wait and see” approach to this matter. The longer the Legislature waits to address this issue, the more the unfunded liabilities will rise and the more expensive the problem will become. This impacts the beneficiaries of the fund: current retirees AND future retirees! Contributions plus investment returns equals benefits! If contributions do not make up the difference when investment returns are low, that means benefits get cut!

These are benefits that are promised to people TODAY. A decision by the Legislature on funding policy needs to be made during the 2019 legislative session, not later!

Caasi Lamb, Director of Special Projects at TRS, provided a review of the Pension Benefit Design Study that took place in 2012 ahead of the 2013 legislative session. TRS is planning to update the study ahead of the 2019 session to provide the Legislature with facts and figures about the defined benefit plan and how it compares to other types of retirement plans such as defined contribution style plans (such as 401ks) and cash balance plans. In 2012, the study revealed that the defined benefit was the most beneficial for Texas public education retirees, as well as the most cost-efficient plan for the state.

TRS Executive Director Brian Guthrie reviewed customer service experiences and goals with TRS staff and trustees, discussing increases in call wait times for TRS members and a large influx in call volume resulting from the changes that occurred recently with the TRS-Care retiree health insurance plan. He expressed disappointment in the wait times and agreed that hiring additional benefits counselors is an immediate necessity that will be addressed. Thirty-one positions will be filled to meet this need by the summer of 2018, along with 13 other positions in the health benefit services department. TRS Chief Health Care Officer Katrina Daniel provided details on the changes to the TRS-Care program’s membership. Of the 270,000 plan participants, 28,450 left TRS-Care between Sept. 1, 2017 and Jan. 1, 2018. According to Daniel, approximately 90 percent of plan participants were successfully transitioned into the new plans.

For participants who left the plan and may be interested in returning, a temporary enrollment period is open through the end of February 2018. The TRS Board of Trustees heard a presentation on Capital Market Assumptions by Steve Voss and Mike McCormick of Aon Hewitt, providing analyses about past market returns and volatility, expected inflation, and what TRS can expect from the market over the next 10 to 30 years. The experience study took place over several months. The results of the study were reviewed with trustees individually, as well as with legislators and stakeholder groups, including TRTA and active teacher groups.

The presentation was made by Joe Newton and Dan Siblik of Gabriel, Roeder, Smith & Co, an actuary and benefits consulting firm.

Newton emphasized the importance of changing the rate of return assumption to the TRS board. “This is the most important decision you could make as a trustee,” he said.

Currently, TRS receives a 6.8 percent contribution rate from the state of Texas, which is about half as much as the next highest state among its peers.

After Newton’s presentation, the TRS board decided to post-pone making a decision on whether to change the rate of return assumption until April.

“To ask us to make a decision on this today, is a very difficult ask,” said Nanette Sissney, a board member. “If we could table this until our next meeting… that would be time that I would need.” 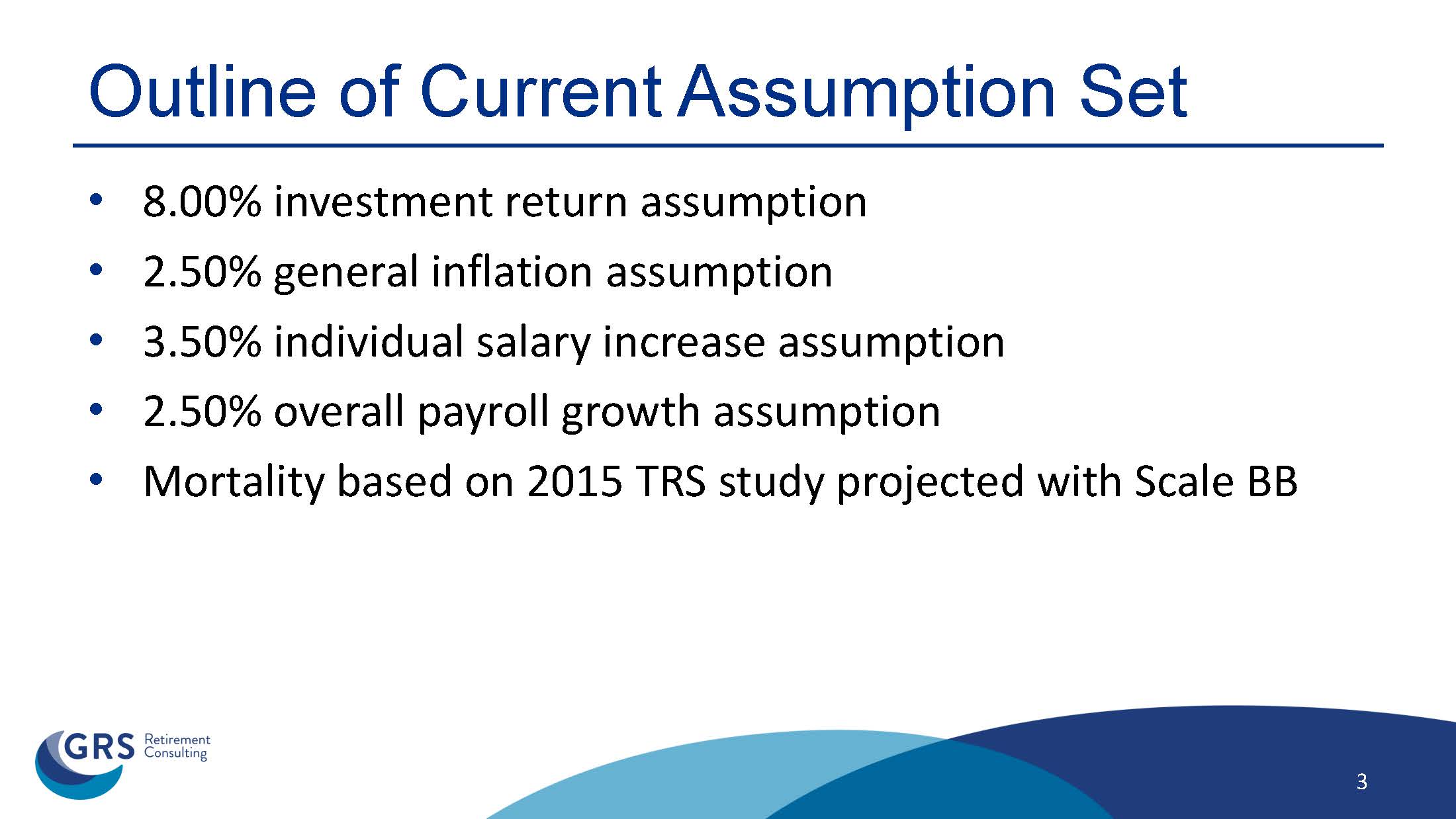 After the TRS Board meeting, Tim Lee was interviewed on Facebook Live. Lee spoke about what today’s discussion means for retired and active educators, as well as the status of funding the TRS pension fund and TRS-Care plan.