TRS Board Meets, Votes on Rate of Return Assumption The Teacher Retirement System of Texas (TRS) Board of Trustees met today to discuss changing the rate of return assumption for the pension fund.

The TRS Board of Trustees took two votes on changing the rate of return assumption. Neither vote passed. As a result, the board will postpone voting on the issue again until its July meeting.

The board’s decision was made all the more difficult by the litany of public testimony from retirees and association representatives. In addition, several board members noted the tremendous outcry and communication they have received from TRS members about the issue.

“Most retirees know that our pension is guaranteed by the state constitution, but our health care is not,” said DeHaven, also pointing out that cost-of-living increases are rare, with many retirees never receiving one. “Many of us are living off the same dollars that we were allocated years ago,” he said.

Tom Rogers from the Austin RTA spoke about his concerns that changing the rate of return assumption would increase the unfunded liabilities for the pension fund, putting retirees further at risk for not receiving much needed cost-of-living increases.

Rogers urged the board to work on making the fund actuarially sound so that retirees could receive a cost-of-living increase.

TRTA Executive Director Tim Lee also spoke, asking the Board of Trustees to focus on “ensuring that the pension system is going to be solvent for years, decades, forever.” Sixty-four percent of all revenue coming into the fund comes from investment earnings. “A small change has a tremendous impact,” said Lee.

Tim Lee stated that he understood the pressure the trustees are under in making a decision about the rate of return assumption and emphasized that “whatever change you make must be followed up with aggressive, purposeful, meaningful action to impress upon the Legislature that they must come to the table… with higher contributions to the fund.”

Lee said that TRS “must present factual data and talk about how the state of Texas has a tremendous bargain” in the pension fund.

“If we don’t support additional revenue for the fund, we are supporting cut benefits for future retirees,” Lee said. There is no current plan in place to increase benefits for retirees. Many of these retirees have recently absorbed huge health care cost increases. Since 2001, there has been only one cost-of-living increase for TRS retirees. That benefit adjustment was not paid to all retirees. The annuity for many TRTA members, even those who received the increase, is not sufficient to meet day-to-day expenses.

Without a guarantee of new money from the Texas Legislature, it would be almost impossible for retirees to receive another cost-of-living increase if TRS lowers the rate of return assumption. “If you’re in a deep hole, a short ladder does not get you out,” Lee said. “There is a lot of climbing that needs to be done.”

Lee stated that TRTA is a willing partner who will work with TRS and the Legislature to ensure the future of the fund.

After the conclusion of public comment, the TRS Board of Trustees began its discussion about the TRS of Texas Experience Study findings and recommendations, including considering the return assumption. 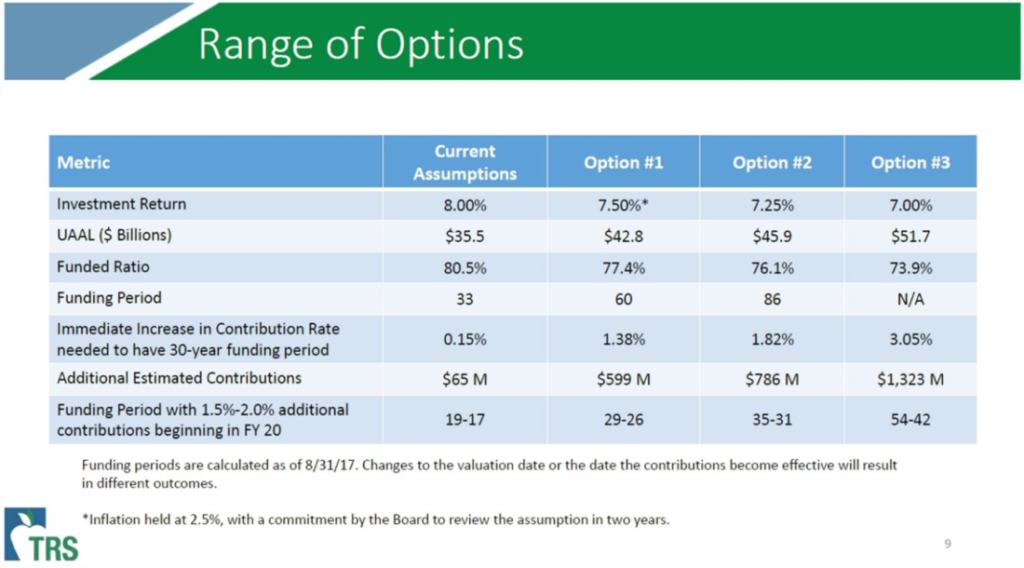 Chairman Jarvis Hollingsworth inquired about the impact on the fund if the assumption is lowered but the fund earns more than projected. Actuary Joe Newton of Gabriel, Roeder, Smith & Co., said it would have a positive impact on the fund and make the system more actuarially sound, provided contributions are increased accordingly.

However, Newton also stressed that there is another entity TRS has no control over, which is the Legislature. Newton said that TRS would have to eventually look at reducing the rate to 7.25 percent in the future if they lower it to 7.5 percent now.

Guthrie stated “the next step (after making this decision) is for us (TRS) to translate that into an ask for increased contributions” from the state. “Whatever we decide to do is what I will go and educate the Legislature about, and I will be very transparent.”

“Predicting what the Legislature will do is the unknown in this discussion, and at the end of the day, that is not your responsibility as a board,” Guthrie said. Trustee James Nance, the retiree representative on the board, said “my fiduciary responsibility is to all members, including the trust.” He said to many retirees, this decision is not just a number. Nance said his moral responsibility is to act in the best interest of the members by supporting a reduction to 7.5 percent. Nance continued “our members are tapped out” and “the Legislature needs to own this.”

Chairman Hollingsworth stated he felt making the decision was a struggle and expressed concern about using incrementalism. “There could be damaging effects of having a more optimistic rate and then underperforming in the early years, because the damage can be so significant we can’t overcome it in the later years.”

Hollingsworth continued “part of me wants to be more conservative in the hopes that we overperform…rather than assuming a more optimistic rate and then underperforming.”

Ultimately, votes on changing the rate of return assumption to 7.25 percent and 7.5 percent both failed.

TRTA is focused on getting the pension fund actuarially sound so that retirees may receive a much-needed cost-of-living increase. Additionally, maintaining the actuarial soundness would help ensure a secure retirement for active educators.

TRTA supports a change to a 7.5 percent rate of return assumption. However, the Legislature must provide the necessary funds to make the TRS pension actuarially sound. TRTA looks forward to working with TRS in the coming months to find the best solution to this pressing issue. The TRS Board of Trustees will convene again in July.