The Teacher Retirement System of Texas (TRS) provided testimony today, Feb. 25, 2020, before the Senate Finance Committee. Among the topics discussed were the long-term facilities planning for TRS, including the recent decision made by the TRS Board of Trustees to continue leasing space at 816 Congress Avenue for its Investment Management Division (IMD) in lieu of moving into the Indeed Tower. The committee had already scheduled TRS to testify on a Senate interim charge relating to the agency’s investment responsibilities, but Lt. Gov. Dan Patrick added a discussion about the Indeed Tower lease to the Senate Finance Committee charge.

As TRTA reported last week, the space TRS reserved at the Indeed Tower, which is still under construction, will be sub-leased per the TRS Board’s decision. The decision to back away from moving into Indeed Tower was influenced by a massive amount of public backlash, including more than 4,000 Facebook comments. The decision for TRS to stay and expand its current space, 816 Congress Ave., is projected to save $9.1 million. 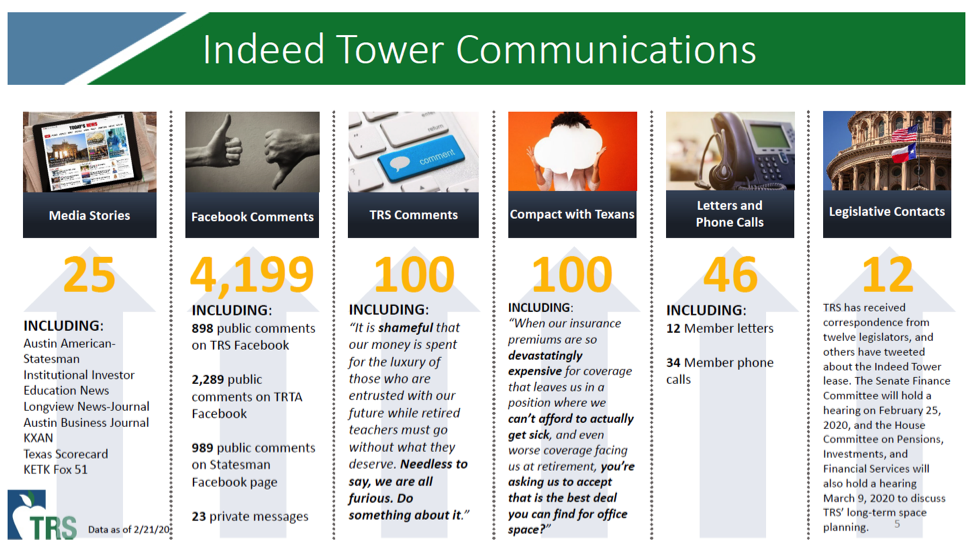 TRS Executive Director Brian Guthrie testified before the panel of legislators. Sen. Jane Nelson serves as the chairman for the Senate Finance Committee. She communicated that Senators were prohibited from going into detail about the Indeed Tower decision due to restrictions set by the State Attorney General. However, Nelson and her fellow Senators used the opportunity to question the decision-making process of TRS and the lack of oversight that the state has over the agency.

In particular, Nelson questioned why TRS found it necessary for its investment team to be in downtown Austin.

Guthrie said that housing the investment team in downtown Austin represents and opportunity “to be closer to the action.” He said that the location represents a recruiting tool for talent, and he said that TRS is competing for talent with Wall Street and Chicago.

Nelson said that TRS made a good decision in not moving its team to “the most expensive real estate in downtown.”

Guthrie said the TRS decision to keep its team downtown is a “short-term, interim” plan. He added that TRS is considering moving out of downtown and establishing a different headquarters. Guthrie said that staying at 816 Congress was TRS’s first choice, but originally, there wasn’t enough available space to house the growing investment team.

Retired Texas educators received support from Senators during the meeting. Senators reported receiving a lot of feedback from educators, and the TRS decision reflected poorly on the Senators.

Sen. Charles Perry stated that he was “surprised at how much lack of real oversight the legislators have over the TRS community.” Perry lamented that legislators didn’t have jurisdiction to tell TRS how to spend administrative funds.

Guthrie said that TRS maintains a close partnership with the Legislature and listens to their direction.

Sen. John Whitmire expressed frustration about the lack of accountability that TRS is being held to.

“I’m getting a lot of questions from retired teachers. I don’t have a lot of answers,” Whitmire said. He described TRS’s Indeed Tower lease as “a hell of a mess” and that it was a “dumb decision.”

Nelson echoed Whitmire’s sentiments, and she said that legislators had been “flooded” with hand-written letters from retirees.

“What were you thinking?” Nelson said. “There are some very disheartened retired teachers.”

“Each (legislator) now has to explain your severe bad judgement,” Whitmire said. “It gets down to arrogance. Somebody’s head ought to roll.”

Sen. Lois Kolkhorst that TRS had tarnished the good feeling that retired educators experienced from the 13thcheck. “For all the good that we did last session, it was undone.”

Sen. Pete Flores said that TRS had lost its members’ trust with the lease. “They’re struggling to pay their bills and their prescription drugs… Basic trust is the most important of all.”

TRTA’s Executive Director Tim Lee provided public testimony to the committee. Lee said that retired educators are badly in need of a COLA. When the TRS members saw the Indeed Tower lease paid for out of the pension fund, “it was shocking.”

In a written statement Lee said, “TRTA members did not want their retirement security dollars being used to pay for luxuries they themselves would never dream to have and did not think were necessary to increase the fund’s performance. It looked frivolous. And the idea of frivolous or unnecessary spending when our retirees are struggling to make ends meet is why that issue met so much resistance.”

He concluded with,“At TRTA, we believe a well-managed, strongly backed, transparent, TRS pension trust fund is a benefit to all Texans. We are all in this together, and I know that our partnerships will help ensure future decisions are handled differently. TRTA believes it is important to win the hearts and minds of the trust fund members before their dollars are spent.” 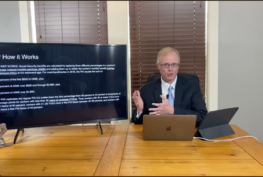 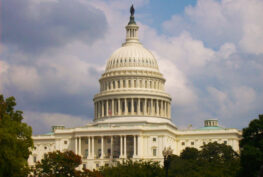